The Columbia Basin Research preseason spring Chinook salmon run peak prediction includes mean run timing as well as run size (www.cbr.washington.edu/inseason/adult ). Table 1 shows these results and other related preseason predictions. Figure 1 shows the 2012 predicted size and timing plotted with historical size/timing information using two methods: (A) defining the run as between March 15 and June 15 the predicted run size is 599,000 spring Chinook, (B) defining the run size with a Gaussian arrival distribution and no cutoff dates the predicted run size is 299,600 spring Chinook. These predictions exceed all the previous observations. Brief details of the preseason predictions are below. 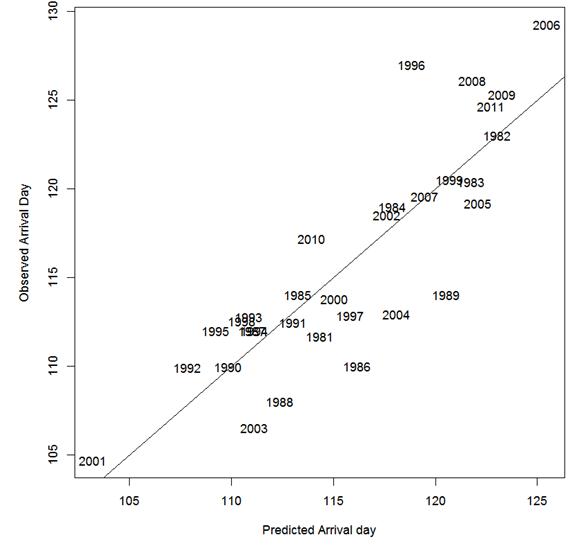 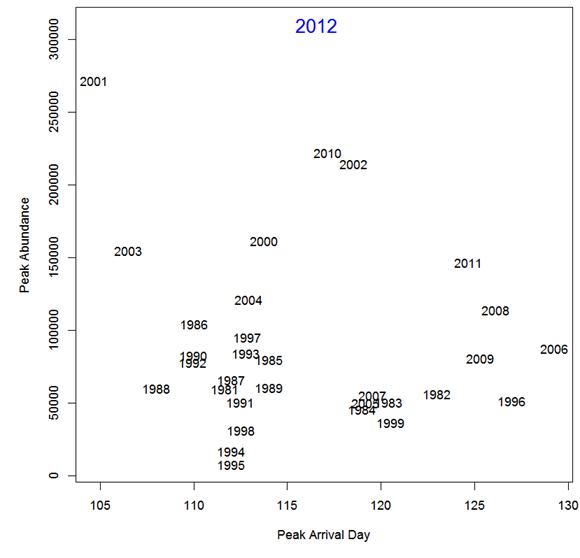 The preseason adult run size used to be estimated using a linear regression of the adult run size against the previous year's jack run. However, the simplistic relationship has been failing in recent years while abundance and environmental covariates are better correlated. Beginning in 2010, an environmental variable was used along with historical count data. Upwelling indices which are highly correlated across the Northeastern Pacific, are believed to be an important harbinger of conditions. The returns of the Jacks and Adults in the previous year indicate the strength of the cohorts to be expected in the following year. So, the remaining population in the ocean is influenced by environmental conditions, especially the remaining 1-year olds. A parsimonious model is sufficient to make a good prediction based on the simple ecology of the life-cycle. Since the Jack abundance alone was a good indicator of the Adult abundance, it is used to illustrate the relationship over the last 30 years and plot the prediction for 2012. The Jack returns in 2009 and 2011 ("2010 & 2012" on the plots in Figure 2) were significant outliers. Figure 2 illustrates the relationship of the Jacks to the Adults and plots the prediction. "LY" means "Last Year". "Adult" and "Jack" are respective counts at Bonneville Dam. The predictions are currently based on this simple mechanistic relationship:

Notes: The abundance must be a function of the number of fish in the ocean. However, we cannot count them, only those in the cohort that has returned previously, but the cohort strength is carried through to the following year and this auto-regression of abundances from year to year provides the needed index of cohort strength. The environmental index is the August upwelling at 42 degrees North in the previous year. The LYAdult cohort does not interact with an environmental variable. During fitting, it contributed little to model fits. Plausibly, these fish (which by definition become 3-ocean adults on their eventual return) are already adult-sized and have less sensitivity to environmental conditions than the smaller LYJack cohort. During 2011, the Jack and Adult return were both strong and the environmental index was above the 30 year median. 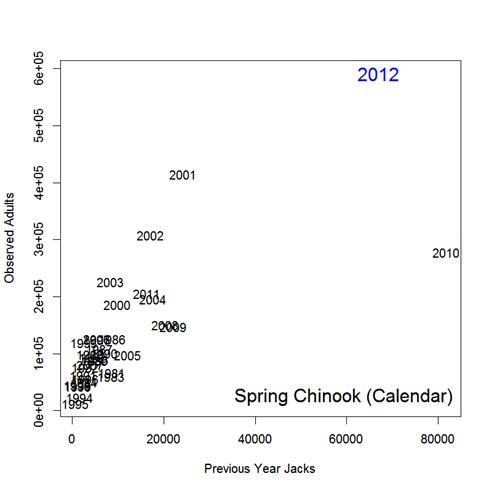 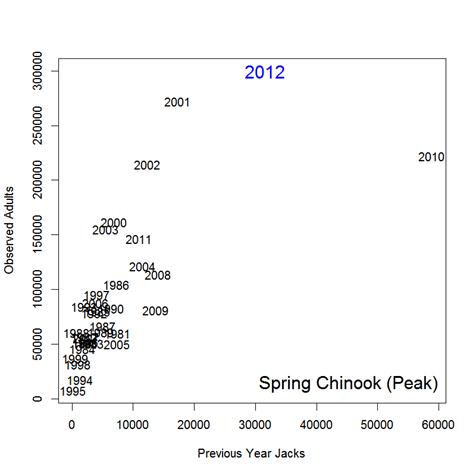 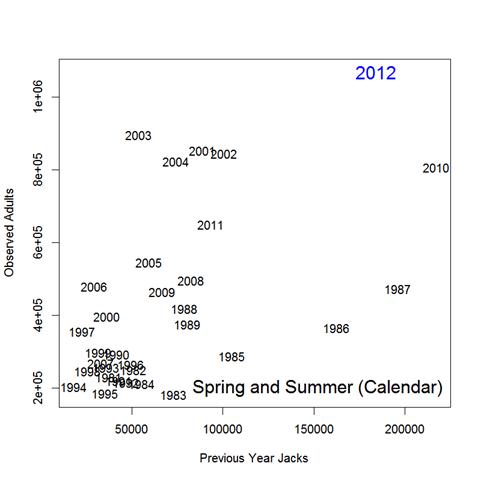 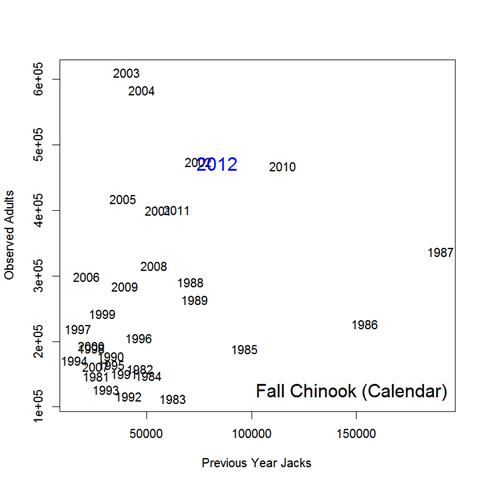 Figure 2. Relationship of adult counts to previous year's jack counts. The 2012 pre-season run size prediction is based on 2011 data (prediction highlighted in blue) including other variables not shown in these graphs.

The duration of the spring Chinook run is defined by two methods. Method A, which is used for management of in-river harvest defines a run as the total number of adult spring Chinook salmon passing Bonneville Dam between March 15 and June 15 (date extended to include Snake River destined summer Chinook). Method B, which is a better ecological characterization of the spring run, simultaneously describes the distributions of the spring, summer and fall runs by fitting three superimposed normal distributions to the combined run (Figure 3). The mean arrival date of each normal distribution characterizes the arrival peak independent of the method used to determine run size. Details are available at, Run timing of adult Chinook salmon passing Bonneville dam on the Columbia River.

The spring Chinook peak run timing prediction is based on  Anderson and Beer (2009. Oceanic, riverine, and genetic influences on spring Chinook salmon migration timing. Ecological Applications. 19(8):1989-2003). It is mechanistically-based  using the run's genetically-controlled run timing plus indices of the ocean and river currents that fish encounter on their homeward migration. The genetic run timing basis is inferred from the timing of the previous year's jack run. The effects of ocean currents encountered by both jacks and adults (that are assumed to be in similar locations) is a result of water movements during the late fall of the previous year and are inferred from upwelling indices. The river velocities jack and adults encounter are inferred from mean spring river flow in the month prior to their arrivals at Bonneville Dam. The model, calibrated with data between 1982 and 2011, has an r2 = 0.74 (Figure 4).

The upwelling index used to determine the distal component of timing influences their location in the ocean, and therefore the time to travel once migration has begun. The measure is upwelling index at 54 degrees North in the previous December. Mechanistically, it would serve to indicate conditions in the Northwest Pacific that influence the movements of salmon to their wintering areas. This year’s prediction for the Peak arrival is day 116 +/- 2  (Apr. 25 in leap year). The upwelling index values have been very close to the mean for the last 2 years. 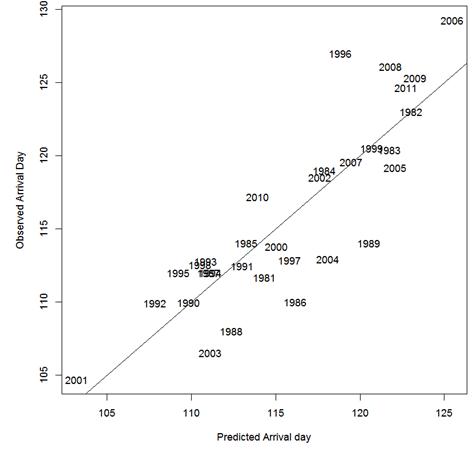