The Columbia Basin Research (CBR) Columbia River adult spring Chinook salmon run predictions now include mean run timing as well as run size (www.cbr.washington.edu/inseason/adult). The preseason prediction for 2008 is that the run size will be above average but the run timing will be average, with the peak run occurring about April 22.  Figure 1 shows the 2008 predicted size and timing plotted with historical size/timing information using the two CBR methods. 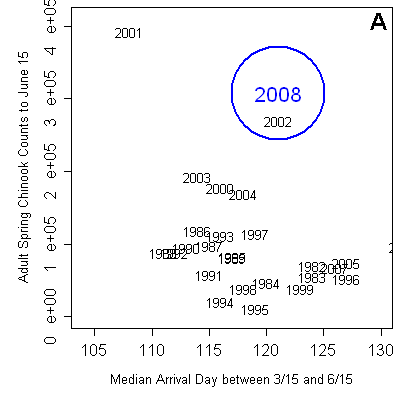 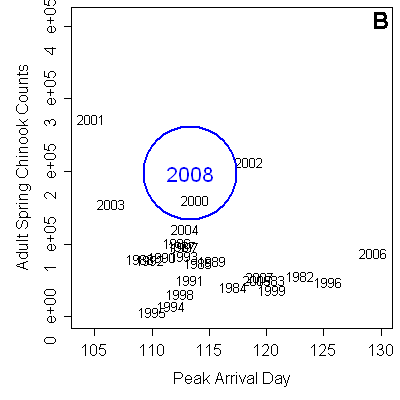 Figure 1. (A) Historic median arrival day and cumulative counts during counting period Mar 15 and June 15. (B) Peak Arrival Day and run size determined by fitting the spring run to a normal distribution.  Points are in center of text. Blue-circled 2008 represents the estimated timing and run size based on the two methods. Axes are the same in both graphs.

Brief details of the preseason predictions and methods are in the following sections.

The duration of the spring Chinook run is defined by two methods. The Escapement Forecaster, which uses the same cutoff date as used for management of in-river harvest, defines the run as the total number of adult spring Chinook salmon passing Bonneville Dam between March 15 and June 15. The Genetics and Environment Timing model, a better ecological characterization of the spring run, simultaneously describes the distributions of the spring, summer and fall runs by fitting three superimposed normal distributions to the combined run (Figure 2). The mean arrival date of each normal distribution characterizes the arrival peak independent of the method used to determine run size. Please refer to Run timing of adult Chinook salmon passing Bonneville dam on the Columbia River for further details. 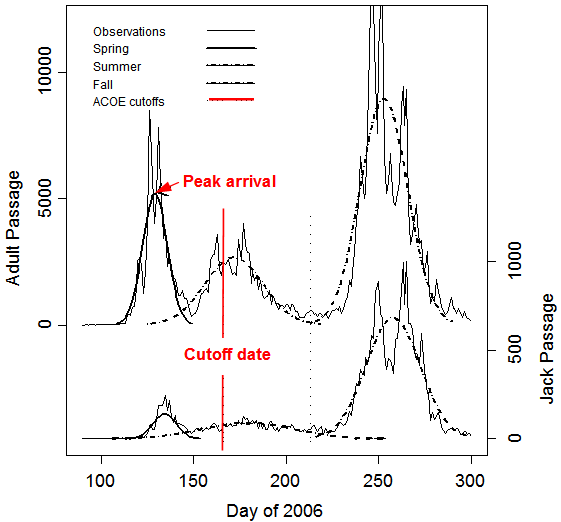 The spring Chinook peak run timing prediction is based on indices of the run's genetically based run timing plus indices of the ocean and river currents fish encounter on their homeward migration. The genetic run timing basis is inferred from the timing of the previous year's jack run.  The effects of ocean currents encountered by both jacks and adults fish approaching the Columbia River are inferred from the January coastal downwelling indices in the years of their respective returns.  The river velocities jack and adults encounter are inferred from river flows in the month prior to their arrivals at Bonneville Dam. The model, calibrated with data between 1978 and 2007, has an r2 = 0.78 (Figure 3). A manuscript detailing the run timing model is in review (Anderson and Beer, submitted to Ecological Applications). 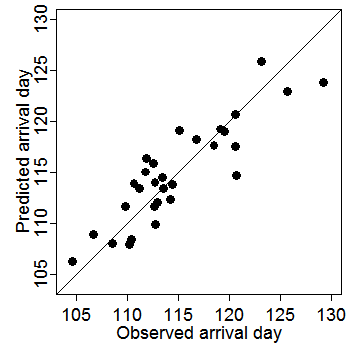 Figure 3. Spring Chinook predicted arrival date vs. the mean arrival date (1978-2007) from the Gaussian function fit to the "observed" counts. 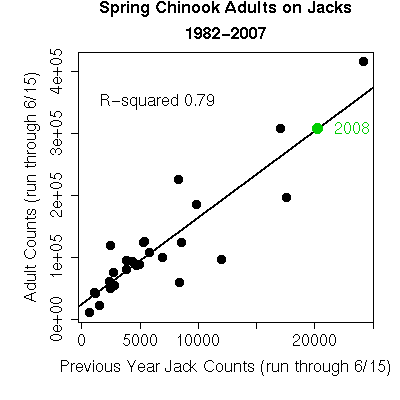 Figure 4. Regression of adult counts on previous year's jack counts (spring run only). Large green dot is the 2008 preseason run size prediction based on the number of jacks observed in 2007 (20239).