The vitality-based survival model is a parametric model for relating stressors and environmental properties to organism survivorship. Vitality is an abstract property which changes in response to organism experience. An organism's resistance to disease, level of stress, behavior, success and failure in feeding, frequency of predator attack, mating, parental care, and habitat choice all induce incremental changes in vitality. Mortality occurs when an organism's vitality reaches zero. Mortality can also occur independent of vitality through accidental-based mortality; catastrophic events occurring equally within a population and independent of the different past histories of the individuals. The model survival distribution is then the product of the probability of survival according to the organism's vitality and the probability of avoiding accidental mortality. 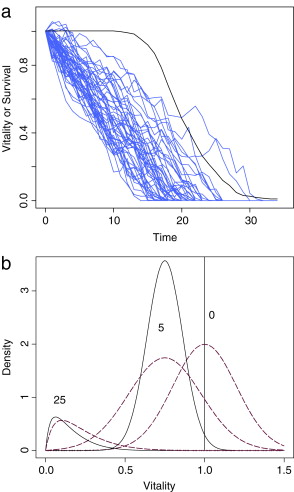 A four-parameter model describing mortality as the first passage of an abstract measure of survival capacity, vitality, is developed and used to explore four classic problems in demography: (1) medfly demographic paradox, (2) effect of diet restriction on longevity, (3) cross-life stage effects on survival curves and (4) mortality plateaus. The model quantifies the sources of mortality in these classical problems into vitality-dependent and independent parts, and characterizes the vitality-dependent part in terms of initial and evolving heterogeneities. Three temporal scales express the balance of these factors: a time scale of death from senescence, a time scale of accidental mortality and a crossover time between evolving vs. initial heterogeneity. The examples demonstrate how the first-passage approach provides a unique and informative perspective into the processes that shape the survival curves of populations.

We model the cross-stage effect of juvenile growth on future cohort survival with vitality, a single stochastic measure of an organism's survival capacity that results in death when it reaches 0. In this construct, the distribution of vitality at the end of a growth treatment stage, which is a measure of survival capacity heterogeneity, determines a cohort's susceptibility to starvation in a subsequent challenge stage. The model predicts that the treatment-stage duration and mass gain determine the mean and variance of the initial vitality distribution of the challenge stage, which in turn determine the effect of a challenge-stage stressor on survival. Studies linking the effect of juvenile growth on time to starvation for chinook salmon and yellow perch are compared to model predictions. The feasibility of predicting survival and heterogeneity in overwintering fish populations from first-year growth is considered. Some limitations and potential extensions of the model to other scenarios are discussed.

The supplemental R script file vitality.gaussian.R contains all functions necessary to run the MLE parameter fitting routine for the vitality-based survival model (Li and Anderson 2009) with an initial Gaussian distribution. The functions are written in the R programming language. Most of the functions are very similar to those written by Salinger et al. (2003) in S-plus for fitting the vitality model with a Dirac delta function initial distribution. The fitting routines differ in how they derive initial parameter estimates for the Newton-Ralphson method.

R Project for Statistical Computing. R is a free software environment for statistical computing and graphics. It compiles and runs on a wide variety of UNIX platforms, Windows and MacOS.

An algorithm is described which determines model parameters for the vitality-based survival model (Anderson 2000). The algorithm uses an MLE estimator on interval-based survival data and returns the vitality model parameters: the rate of vitality loss, the variability in the rate of vitality loss and the rate of accidental mortality. Standard errors of the parameter estimates and a Goodness-of-fit measure (via a Pearson's C test) are also returned. Issues of right censored data and study start time are addressed.

A survivorship curve is shaped by the differential survivability of the organisms within the population, and a change in a survivorship curve with a stressor reflects the differential response of the organisms to the stressor. Quantifying this linkage in a simple, rigorous way is valuable for characterizing the response of populations to stressors and ultimately for understanding the evolutionary selection of individuals exposed to stressors. To quantify this stressor-individual-population linkage with as few parameters as possible, I present a simple mechanistic model describing organism survival in terms of age-dependent and age-independent mortality rates. The age-independent rate is represented by a Poisson process. For the age-dependent rate, a concept of vitality is defined, and mortality occurs when an organism's vitality is exhausted. The loss of vitality over age is represented by a continuous Brownian-motion process, the Weiner process; vitality-related mortality occurs when the random process reaches the boundary of zero vitality. The age at which vitality-related mortality occurs is represented by the Weiner-process probability distribution for first-arrival time. The basic model has three rate parameters: the rate of accidental mortality, the mean rate of vitality loss, and the variability in the rate of vitality loss. These rates are related to body mass, environmental conditions, and xenobiotic stressors, resulting in a model that characterizes intrinsic and extrinsic factors that control a population's survival and the distribution of vitality of its individuals. The model assumes that these factors contribute to the rate parameters additively and linearly.

The model is evaluated with case studies across a range of species exposed to natural and xenobiotic stressors. The mean rate of vitality loss generally is the dominant factor in determining the shape of survival curves under optimal conditions. Xenobiotic stressors add to the mean rate in proportion to the strength of the stressor. The base, or intrinsic, vitality loss rate is proportional to the -1/3 power of adult body mass across a range of iteroparous species. The increase in vitality loss rate with a xenobiotic stressor can be a function of body mass according to the allometric relationship of the organism structures affected by the stressor. The model's applicability to dose–response studies is illustrated with case studies including natural stressors (temperature, feeding interval, and population density) and xenobiotic stressors (organic and inorganic toxicants). The model provides a way to extrapolate the impact of stressors measured in one environment to another environment; by characterizing how stressors alter the vitality probability distribution, it can quantify the degree to which a stressor differentiates members of a population.

The algorithm determines model parameters for the vitality-based survival model (Anderson 2000). The algorithm uses an MLE estimator on interval-based survival data and returns the vitality model parameters: the rate of vitality loss, the variability in the rate of vitality loss and the rate of accidental mortality. Standard errors of the parameter estimates and a Goodness-of-fit measure (via a Pearson's C test) are also returned. Issues of right censored data and study start time are addressed.